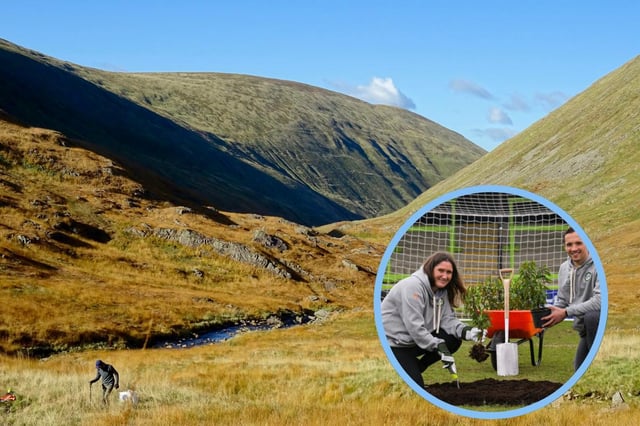 One beverage company has vowed to plant 50 trees in Scotland every time a professional football game in the UK ends 0-0 to help the country meet its net-zero goals.

Innocent, sponsor of League 2 team Forest Green Rovers, plans to plant the trees in three different areas in Talla and Gameshope on the Scottish Borders.

The project runs in partnership with One Tree Planted, a nonprofit that plants trees in countries around the world.

The beverage company has already committed to planting 6,550 trees as far as there have been 131 0-0 draws in these leagues this football season. The number is expected to hit 10,000 trees by the end of the season.

Forest Green Rovers chairman Dale Vince was joined by players Kane Wilson and Nicky Cadden, as well as Hannah Dingley – the first woman to become an academy manager of a Football League club when they planted the first tree for the campaign on the field.

The tree has now been moved to a permanent location so that it can develop its full potential in the years to come.

Anna Bateson, Innocent’s UK Marketing Director, said: “Our sponsorship of Forest Green Rovers is about more than just renaming the land. We want to show how companies from different areas can come together to point the way towards sustainability. We decided that for every game that goes zero, we make sure the environment is the winner. “

Dale Vince, chairman of Forest Green Rovers, said, “Nil-nil is a score line with no winners or losers. But not anymore. With 50 trees planted for every goalless draw in professional football in the UK, there will be a winner. As an environmentalist, I’m very interested in it and with our own league so tight right now, I’ll be willing to give our rivals no results for additional reason. “

The Innocents Initiative-backed Native Forest Restoration Project in Talla and Gameshope, Scotland covers 1,832 hectares of hills in the central hills of the southern highlands of Scotland.

The tree planting project aims to restore indigenous forests to an area where deforestation occurred centuries ago, according to One Tree Planted.

In the past 25 years, BFT has planted nearly two million trees across southern Scotland, more than 200,000 of which were planted by volunteers.

The progress of Innocent’s tree planting project can be monitored by tracking a tote on the social media pages of Forest Green Rovers and the beverage maker.

A message from the editor:

Thank you for reading this article. We need your support more than ever as the changes in consumer habits caused by coronavirus are affecting our advertisers.

If you haven’t already, you can support our trusted fact-checked journalism by purchasing a digital subscription.

Free sports activities betting ideas for Saturday February 13 together with...