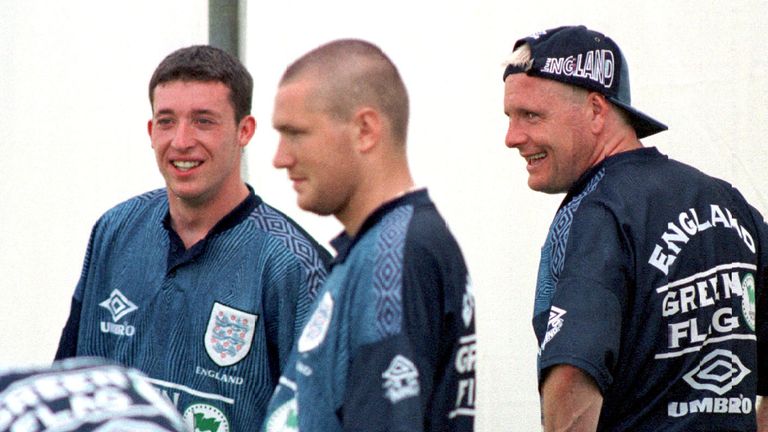 Teddy Sheringham and Robbie Fowler sat down with Sky Sports News as part of a special Boys of ’96 series to relive their memories of that summer, including Paul Gascoigne’s miss against Germany and those penalty shootouts.

In the series, reporter Mark McAdam is on a mission to speak to every member of the 22-man squad starting in 1996.

He’ll travel across the nation in an all-electric van tracking everyone from David Seaman to Alan Shearer before the entire crew gets back together.

In episode four, he managed to find two strikers on Terry Venables’ roster – Teddy Sheringham and Robbie Fowler – to share their memories of the tournament.

Sheringham, who scored the fifth of England’s penalties in the 5-6 loss on penalties to Germany in the semifinals, said: “I’ve never been so nervous about taking that fifth penalty against the Germans in my life because I knew that if you miss this punishment, you will be ridiculed for the rest of your life.

“So it was. It doesn’t matter what you’ve done in your career, you will be remembered for that failure.

“I remember putting the ball on that spot. Sometimes you look at the goalkeeper and think he’s massive, where should I hit? How should I score?”

“But I remember putting the ball down and looking up [at the keeper] and he looked small. I remember when I put the ball down I said to myself, “If I put this ball exactly where I want it, it cannot save it.” That gave me such a positive vibe.

“I stepped back, pretending to crush it hard, but took my faithful penalty – side foot, hard, firm, high to the left of the keeper and just saw it go exactly where I wanted it and hit the back of the network.

“The relief and the adrenaline rush at once was just unbelievable that we are still in this tournament, we still have a chance. I have done my part and I hope the next one does its part.”

Fowler: I should have played against Germany!

Picture:
Robbie Fowler, Steve Howie and Paul Gascoigne practice before the start of the Euro ’96 competition

Fowler, who has attended the tournament twice, said the moment he remembered most was Paul Gascoigne’s miss in the same semifinals. But he said: “[Venables] should have attracted me [against Germany] also.

“I won’t let him get away with that!”

Fowler’s personal penalty memory was one that was never shot when England beat Spain 4-2 in the quarter-finals.

“I am me, an exuberant young fellow – [I was] I’m glad we made it through, but devastated that I never scored the winning goal! “

To watch the full episode, click Play in the video at the top of the article, or find it on Sky Go.

Premier League completed offers: Each accomplished switch within the 2021 summer...