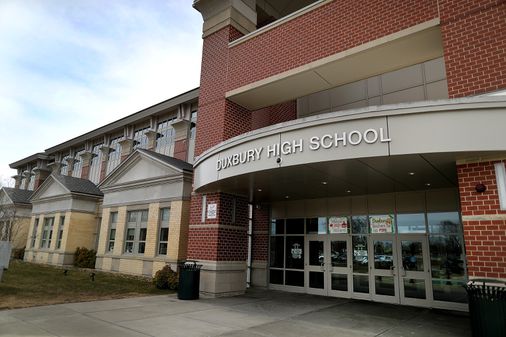 “Both the toleration of a religious prayer by a team before a football game and the holding of a ‘team mass’ in a Catholic church are blatant violations of school district politics,” wrote Antonucci. “Prohibiting school prayer in the classroom is also prohibited during a school-related sporting activity such as a public high school soccer game.”

He added: “The ban on these religious activities in connection with any public school activity is clear. Such sectarian events can be viewed as intimidation or coercion for non-Catholic students. “

Attention turned to the successful high school football when an offensive lineman shouted “Auschwitz” as the blocking voice during the game on March 12, 2021 with Plymouth North High School. According to the US Holocaust Museum, the Auschwitz complex was the largest Nazi extermination camp, where around 1.1 million Jews, Roma and Soviet prisoners of war were murdered.

“At that time, according to all information [2010-2012] the college team began using the word “rabbi” to refer to a piece that was originally called “rabbit.” “Rabbi” then developed into other Jewish terms such as “Dreidel”, “Yarmulke” and “Hanukkah”, which were used for the “Hare” piece, “wrote Antonucci. “The actions of the coaching staff to condone the use of the above offensive terms for the game of rabbit are clearly contrary to the district guidelines.”

However, the audibles were not used regularly during the games, the investigation found. “Sufficient credible evidence was found to support the conclusion that coaching staff were aware of the use of such terms during training,” wrote Antonucci. “There was insufficient credible evidence that these terms were used during games in previous seasons.”

The investigation also found that the coaching team did not model appropriate behavior for the student athletes in recent seasons.

“The investigation found that profanity is used marginally, as well as insensitive and homophobic slurs. Profane language has been used as slogans by coaches and players. The coaching team used sexually insulting jokes and innuendos in front of the players, ”wrote Antonucci. “The trainer staff dealt with profane and vulgar language and tolerated the use of profane and vulgar language by the students.”

According to Antonucci, the district has responded to the results of the report in a number of ways, or will soon do so, including:

– A “full external review” of the system’s sports program, including the manual, evaluation of coaches and the role of funding organizations. The aim is to install best practices.

– Finalize the role that the Athletic Advisory Committee will play in the future implementation of the program.

– Spring Sports 2021 trainers participated in a “comprehensive training on diversity, equity and inclusion”.

– Soccer players participated in a “mandatory Holocaust presentation by a third generation Holocaust survivor”. After the program, many players queued to shake hands with the presenter and thank her for her time and for sharing the incredible story of her family. ”The players also attended training on“ Becoming an Ally and Upstander ”part.

– The district has partnered with Northeastern University’s Center for the Study of Sport in Society and “will be training a core group of coaches and student athletes this fall … to ensure that our coaches and student athletes understand how to deal with prejudice respectfully and sensitive language and address racism and discrimination in our Duxbury sports teams. “

– “Adequate human resources actions will be taken based on the findings in the investigation report,” but what actions are being taken and against whom are not made public due to union contracts and federal data protection laws.

Blake claimed that Joseph Foley and Melissa Foley “maliciously caused”[d] Written correspondence accusing the defendant Blake of despicable acts ”as part of a“ murder murder ”campaign that cost him both his reputation and his career in the city’s school system.

The Foleys have not yet responded to Blake’s counterclaim last month.

Separately, Duxbury Public Schools have stated in court records that they should not be legally held responsible for the emotional trauma ex-student Parker Foley suffered when he was allegedly sexually abused by Blake in the mid-2000s.

Foley’s parents sued Blake and the school system for accusing administrators of failing to protect their son from Blake, who allegedly raped their son. Foley died of a drug overdose last fall at the age of 27.

The lawsuit cites both Blake and the schools as defendants and alleges that Blake’s inappropriate touches of Foley escalated to rape and forced oral sex in the gym and empty classrooms in middle school. According to the Foleys lawsuit, the alleged assaults didn’t stop until Parker Foley brought a knife into the school and threatened his tormentor.

Blake has stubbornly denied harming Foley and has not been charged with criminal charges.