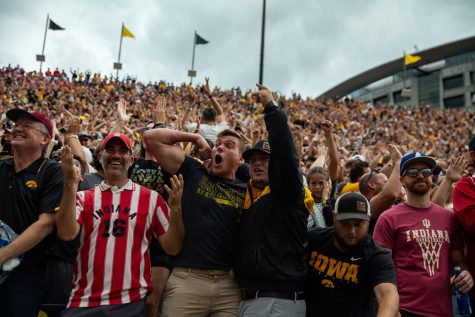 At Kinnick Stadium in Iowa City, the Hawkeyes saw the Hoosiers down dominantly with 34: 6.

The Iowa Student Section leads a chant during a football game between No. 18 Iowa and No. 17 Indiana at Kinnick Stadium on Saturday, September 4, 2021. The Hawkeyes defeated the Hoosiers 34-6.

For the first time since November 23, 2019, Iowa football welcomed its first crowd at Kinnick Stadium on Saturday, which has nearly as many spectators. The Hawkeyes faced No. 18 Indiana at 2:30 p.m. for a 34-6 blowout win.

A total of 68,166 people walked through the gates of Kinnick to watch the Hawkeyes battle the Hoosiers, and the energy these guests brought with them surpassed the stands and found its way onto the pitch.

“It’s just great to be back in Kinnick and to have fans,” said Iowa soccer coach Kirk Ferentz after the game. “We all felt it [on the field]. Just come in today, day and night difference from last year. . . It was fantastic to see how people just move outside and enjoy life a bit and have them in the stadium. “

Last season, the Hawkeyes played all eight games in fanless stadiums as the Big Ten Conference forced all of their soccer teams to stand without fans in an attempt to fight the spread of COVID-19.

During Saturday’s game against Indiana, Iowa did not require fans to wear masks or provide proof of vaccination to enter Kinnick Stadium.

Fans celebrate during a soccer game between No. 18 Iowa and No. 17 Indiana at Kinnick Stadium on Saturday, September 4, 2021. The Hawkeyes defeated the Hoosiers 34-6. It’s been 651 days since fans got to Kinnick. (Ayrton Breckenridge)

“We have certainly had a lot of discussions about mitigation, ”said Barta. “What’s the best way forward? How do we do it best? But in the state of Iowa we’re a state institution, and it would be against the law to require vaccinations and ID cards and the like. “

“So we are where we are,” added Barta. “As I mentioned earlier, anyone who walks through the door today, anyone who goes into the stadium, would love to get vaccinated.”

The lack of mitigation efforts at Kinnick Stadium on Saturday caused concern among some Hawkeye fans and Iowa City community members.

I love the Hawkeyes and I love The Wave.

I don’t like the Delta variant that is quickly spreading through the crowd and community of Iowa City today.

This is irresponsible without masks or any kind of mitigation effort. https://t.co/69dpba8c9V

Masked or unmasked, the fans at Kinnick Stadium were dazzled with a series of groundbreaking games on Saturday. Running back Tyler Goodson scored a 56-yard touchdown on an outward run less than two minutes into the competition. Defensive back Riley Moss posted two pick sixes that afternoon – the first came less than a minute after Goodson’s touchdown.

“I think those two games in a row were a big boost of energy for the team, and not just for the team, but also for the crowd and the energy in the stadium,” said junior running back Tyler Goodson. “I think they gave us momentum throughout the game. We accelerated and drove on. . . So we just kept going and that gave us a lot of momentum. “

While Moss came up with two pick sixes on Saturday, he wasn’t completely relaxed against the Hoosiers – not even at the beginning when he recorded his first interception.

“It felt like my first game at Kinnick again because it was loud and loud and it was absolutely amazing,” said Moss. “One thing I will never forget in my life is running out of the tunnel, especially today. I mean, [today’s crowd was a] among the three loudest spectators in the Kinnick Stadium. “

Iowa will be leaving next week to face Iowa State at 3:30 p.m. at Jack Trice Stadium in Ames. Action between the Cyclones and Hawkeyes is broadcast nationwide on ABC.