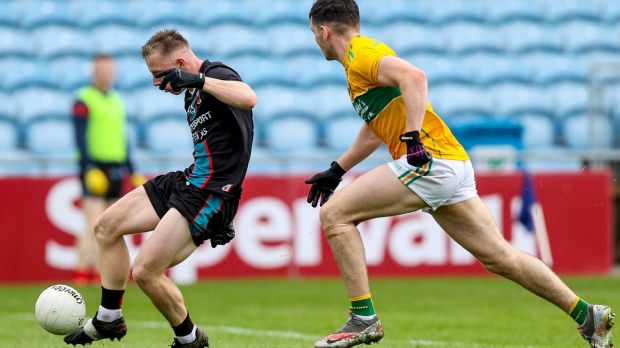 Gaelic football has left the heart. As much as the Ulster games last weekend were praised, I believe there is a risk that what makes the game so special and unique will be lost. There is a noticeable lack of physicality. A pronounced freedom from aggression. A lack of sales. The game has been disinfected – and soft in my opinion.

We had a game ourselves on Sunday so I never saw the Donegal-Tyrone game live. I knew the result when I turned on the recording. The game began and Tyrone won the throw-in. Thirty-three seconds later, Kieran McGeary scored a point. No hand was placed on a Tyrone player during setup. And Donegal had 13 men within their 65.

Seconds later, Shaun Patton made a quick kick-out for Donegal and Michael Langan sauntered up the field. Péadar Mogan dumped Hugh McFadden on his 65th defense and he played right through the heart of the Tyrone defense, flicking the ball at Jamie Brennan, who hit his defender two or three yards in front of him. That first minute looked to me like a snapshot of where Gaelic football is right now.

Years ago, when my brother Mark and I lived in Brooklyn, we got tickets to see the Knicks play at the Charlotte Hornets. I still remember the excitement of taking the train downtown to Penn Station with our tickets in my pocket. We wanted to get there early for several reasons. I wanted to see Patrick Ewing warming up.

But also getting in early was what we learned from the Ulster championship games. The first minute after the ball was thrown in at games in the 1990s could sometimes be the highlight of the day. Then the action started. It was like a release of pent-up energy. It was full blooded and chaotic. That was what attracted audiences early on – and still does.

Well, we took our seats in Madison Square Garden. Charlotte had Mugsy Bogues to play and he was 5’3 inches tall. I think he got 11 points in the first minute or so. But: Many fans still had to take their places. We couldn’t find out. Knicks fans bought beer and chips and were in no hurry to get into the arena. One guy sat down halfway through the first quarter. The places were still filling up. I couldn’t help but ask my neighbor: How come no one comes in on time? His answer has always stayed with me. “Because the game hasn’t started yet”.

I’m worried this will come true in Gaelic football. We had a brilliant game between Armagh and Monaghan in the sense that it was very precise and very close. But it wasn’t a game that Kieran McGeeney or his defensive coach will find brilliant. It’s just so far from the electrifying chaos in which Kieran himself played.

For me, there aren’t many options left that the underdog can take advantage of in relation to competition. The game is conducted in a soft and disinfected manner. Coaching tactics favor stepping down side and shadow defenses. The games in Ulster last weekend were enjoyable for the spectators because they formed teams with comparable skills. There were some good results and the results were at stake well into added time. But the game is reduced to a procession of ratings that follow the pattern of a basketball game between teams of equal value: upgrades and downgrades until you reach the final. Now one can say that this is good and wonderful. I would argue that something is missing.

Donegal has given our biggest rival 23 points over the past 10 years. That doesn’t sit well. This is difficult for many people to understand. I think the players’ technical skills have improved dramatically. But I disagree that this is what caused the scores to rise. The ratio of shots to score confirms this. Armagh scored 0-14 from 16 shots against Monaghan in the first half. That says a lot to you. It tells you there is a lot missing in the defense department.

The reality is there are few defenses left that really put pressure on their opponents. It is as if there was a pact to swap scores. Do we want that? With 3.18 goals per game, the Dutch Football League is the league with the highest number of goals in the world. But there is no real international interest in it.

You need to find out: what am I seeing? Many of these strikers who excel in the Dutch league are not going anywhere. They couldn’t hold those numbers in the Premier League, where they face a cohesive, aggressive defense where teams have to do both.

So we have to be careful what we want. When I ran Donegal, we always tried to break the hope-you-miss attitude. As far as I can tell, this has become the prevailing attitude across all teams. You will run next to the attacker and guard him and keep him two or three meters away and you will not make whole blood contact.

You will be raising your hands and making a little noise while he is shooting. He will probably score four goals out of six. So you hope he will be missed. If not, you know your shooters on the other end are getting their chance. That parched, desperate defensive honesty was somehow taken out of the game.

I watched comedian Michael McIntyre do a sketch on a Friday night years ago. He told a yarn about going to a fancy restaurant. It was about the wine and the waiter and the talk about the tasting. He used this phrase: Then the bullshit production begins. Nobody knew anything about the quality or the vintage of the wine. So go through this charade. He looks at the wine, he smells the wine and he tastes it carefully. And then this moment of tension – which is not – when he pauses briefly and says: “Yes. Yes. I will take it’.

And now, when I look at the defensive aspect of the game, I feel like a lot of it is a bullshit production.

You’re telling me Donegal couldn’t have reduced the 0-23 to 0-16? Or that Tyrone couldn’t have kept Donegal on a lower score. You tell me that 2-25 is the goal potential of the best teams? I do not believe that. I think it’s because they face little more than symbolic resistance. Sometimes it looks like practice shooting.

We have always prided ourselves on the purity and honesty of Gaelic football. People enjoyed raving about the big hits and the physicality. That was trained.

The upside is you don’t have to do the hard yards. You don’t have to do the hard coaching. It takes gruesome and tireless work to keep an opponent’s score at 0-17, shall we say. It takes months on the training field. It seems to me that the teams made this tacit agreement. The midfield fight is over. The defense is gone. Gaelic football is now just a shooting competition.

When you feel like your team is giving it their all, that’s all you ask of any supporter of any sport. I’m not suggesting that the players are not bringing it in. And I’m not suggesting that the training is not of a high standard. The game is now more defensive than ever when it comes to the numbers behind the ball. But nobody defends! It’s important to point out that tight, aggressive, confrontational defense is a core attribute of the game, not a dirty word. And I can’t see it anymore

For me and my eyes, most of the effort is focused in one direction. The problem with shootouts is that they become absolutely boring when there isn’t a close game or when the technical skills are different. It will be a lights-out scenario, a la Mayo-Leitrim. There were some great results in this game. But who cares?

So with all the praise for the high score, we have to pause. Are the people leaving the country transported by an incredible collision of cultures and counties? I do not think so. The elementary rawness that arises from vigorous defensive play based on heart, passion and ability is missing in the theater. The energy that creates is also missing.

Championship football should be a battle for inches for over 70 minutes. I just don’t know what Gaelic football is. But that’s not it.

Premier League switch window might open on July 27 with vote...

When does the summer season switch window shut? Dates for Premier...