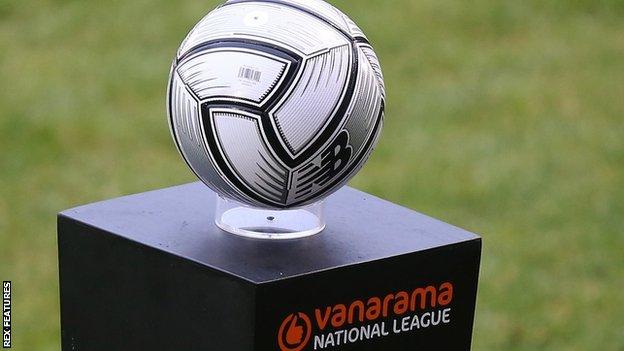 Eleven clubs in the National League have lost their appeals against sanctions imposed on them for failing to play games last season due to Covid-19.

Dover Athletic, his. would have Results deleted after failing to play beyond January, 12 points will be deducted the next season and a £ 40,000 fine will be imposed.

“The system and the FA have really let us down,” said Dover Chairman Jim Parmenter.

They were one of seven National League clubs that voted to end the season in February, but the top flight remained.

Parmenter, who had put all Dover staff and players on vacation in February to prevent the club from going bankrupt, had previously stated that they were wouldn’t pay the £ 40,000 fine.

The club has already decided to switch from professional to semi-professional status, as they have not played a competitive game since January 30th.

“I was surprised and disappointed with the outcome of the independent appellate body, but I was also quite upset with the written reasons,” he told the club’s DAFC TV channel.

“The financial situation we found ourselves in was very clear and it showed. The fact that we couldn’t predict the next five years when we were in the middle of a pandemic doesn’t seem relevant.

“But we are making progress, we have had to cut our budget and we will probably be at 50% last season.

“We start with a 12 point deduction but we will fight hard as a club to overcome it.”

Parmenter also confirmed that the club was investigating the possibility of legal action, but the admitted costs would likely be “illicit”.

Aside from Dover, 10 other clubs, all playing in the National League North or South, have each been fined £ 2,000 per game violation and suspended with a two point deduction, also per violation.

Three other National League North teams – Blyth Spartans, Farsley Celtic and Spennymoor Town – have waived 50% of their fines (£ 6,000 for Blyth and £ 4,200 for Farsley and Spennymoor).

The National League North and South were declared null and void in mid-February after the majority of clubs in both divisions voted against continuing the lockdown.

The clubs of all three divisions started last season with the help of government grants, which were able to cover the additional expenses due to the coronavirus pandemic until December.

Further financial support for the remainder of the season, however, was only provided through low-interest loans, which many clubs did not take out.

Last month, clubs rejected a proposed vote of no confidence against the National League board of directors and chairman Brian Barwick.

Barwick will step down if the season ends on the Sunday after the National League play-off final between Torquay United and Hartlepool United.

Petition to ban racists from soccer matches closing on 1,000,000 signatures