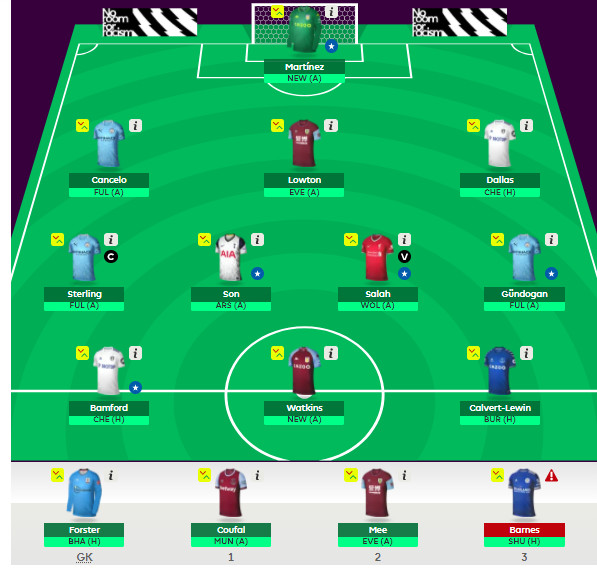 Game week 28 presents me with several dilemmas. Barnes are injured at Leicester and West Ham United and Burnley face difficult games. My hopes for big points are in the hands of Pep and his team selection. Are Sterling, Gundogan and Cancelo playing? I have more chances of winning the lottery than working out the Manchester City roster, but I am armband because of the game at Sterling and their cap on points is high compared to anyone else on my squad.

I would have done it to Salah but his form wasn’t that good and Liverpool themselves were extremely poor (domestically anyway). Salah was my contact, my Captain America (or Egypt?). With Captain America you think what he can do with just a shield, but he and Liverpool recently looked like a shadow of the great team that won the Premier League last season.

I will switch from Sterling to KDB at some point, which is more likely to start games. Having three Man City players is not good for my health. My heart cannot bear this level of anticipation and disappointment. I feel like an emotional volcano ready to blow any minute. The past week’s total score didn’t help, but this week I’m practicing my relaxation techniques in preparation and hoping that I’ll be more relaxed when the team sheets are released.

Today’s goal could be tomorrow’s win and I won’t be making transfers this game week as there are no outstanding games and I plan for game week 29 when there are only eight teams playing. Two transfers to the bank are of great help.

What do you think of my team Do I have to use a transfer this week? How is your team developing before the Friday deadline? Please share in the comments!

Zambia’s Barbra Banda nets one other hat-trick in Tokyo 2020 thriller...