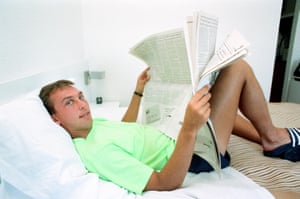 In a newsagent in Gran Canaria last year, I did what any sane person would do if they had to choose between a two-day-old edition of the Daily Mail and yesterday’s Daily Mail – I bought Marca.

I don’t speak Spanish, but I fondly remembered the Madrid sports paper from the years when a friend was working in Andalusia and we ran to Jock Wallaces Seville at the Estadio Ramón Sánchez Pizjuán Ted McMinn – an admittedly bizarre fusion of ingredients that misdirected you Remember MasterChef candidates who offer a beet meringue and haggis mousse dessert.

Unfortunately, Marca is not what it was. For reasons no doubt related to budget cuts and the internet (a combination blamed for all bad things these days, like Doom and the Devil, or Tommy Docherty and Malcolm Allison in the past), they stopped making comic charts to create how important goals have been scored. I loved them – Lowryesque players, the progress of the ball marked by the kind of swoosh lines familiar from Billy’s boots, the fruitless dolphin dive of the goalkeeper, and the star bolt of the ball hitting the net – and could never find out why no British newspaper had taken up the idea.

The little drawings weren’t just a pleasure in themselves, I should add. They also provided clear evidence of the true nature of “assistance” – a subject that rightfully troubles When Saturday Comes readers when the last few pages of the letter indicate it. (Strange that, in relation to Diego Maradona’s spectacular second goal against England, so few people mention Héctor Enrique’s crucial pass.)

Joe Cole flips through a copy of France Football that happens to have him on the cover. Photo: Tom Jenkins / The Guardian

Despite the lack of drawings, Marca was still very pleased. I sat on a bench in the sunshine for almost an hour, looking at the lower division tables, imagining myself watching Choco against Rápido de Bouzas on the terraces and idly wondering what headlines after a last-minute defeat for Real Titánico could occur.

Foreign sports magazines are to a football fan what an atlas is to a traveler – an armchair adventure in exotic countries. For many years in the 1980s, I worked a few doors down from A Moroni and Son, a Soho institution that boasted of selling “magazines and newspapers in over 20 different languages”. On Monday afternoon, a group of chefs and waiters from the local restaurants gathered on the sidewalk by the door to wait for the Gazzetta dello Sport to arrive, just as we gathered in the paper shops on Saturday evening, waiting for our own soccer pinks . You waited outside because Moroni was like the Estudiantes penalty area in the 1960s – you didn’t loiter in it if you knew what was good for you.

In Moroni’s heavy “No Browsing!” Handwritten notes with a touch of anger covered the wall at eye levels from Micky Gynn to Kevin Francis. Behind the counter sat Johnny, the son, whose crispy, toad-like face was surmounted by raven-black hair. Johnny never moved. He seemed to be sleeping. The look was deceptive. A careless visitor only had to take a magazine off the shelf and he would get up in anger. He was a dragon and that was his gold. “Are you going to buy this?” he roared.

Once, while looking at the covers of Kicker, Guerin Sportivo, and France Football, a man ventured into the store, picked up an AZ and started scanning it. “This isn’t a bloody reference library,” yelled Johnny. “I just want to find Romilly Street,” replied the fellow airily. We regulars went white and took the crash position for fear that the owner’s reaction would be so fiery that the store would explode.

Despite the terror (and in part because of it), I have bought hundreds of football magazines and newspapers from Johnny Moroni over the years. After leaving school, after not learning multiple languages ​​(damn it, Docherty and Allison), there was little I could learn from the articles, but the results, the line-up, the rankings and those little cartoons were enough. After all, a few pounds was a small price to pay for a mental trip to the Stadio Città di Gorgonzola or to watch Young Fellows battle Rapperswil.

When I mentioned Marca to a friend he said, “Do you think there is a Spanish equivalent to the non-league paper? It would be great if there were, wouldn’t it? “Only a blinking, unimaginative fool who stays at home in his head would disagree.

Olympics 2020 ladies’s soccer teams: Who’s taking part in who within...