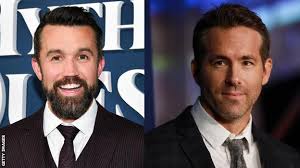 Hollywood actors Rob McElhenney and Ryan Reynolds have completed their acquisition of Wrexham.

As a result, the new owners have made a £ 2 million equity investment in the club under the contract.

Funds will immediately go to new initiatives by the Racecourse Community Foundation, including £ 50,000 to improve the women’s football program and increase participation at all levels.

In addition, the identification of the first-team players will have priority so that the club is in the best possible position for the summer transfer window.

In a joint statement, McElhenney and Reynolds said: “It’s a special day for both of us to become the newest stewards in the long and storied history of the Wrexham AFC. Together with the players, staff, fans and the local community, we can now pursue our goal of growing the team and returning it to the EFL in front of increased attendance and in an improved stadium, while at the same time making a positive difference to the wider community in Wrexham.

“Wrexham AFC has only been able to thrive because of the incredible efforts of the Wrexham Supporters Trust. Its members reflect the integrity and spirit of the city and will always play an important role in the club.

“Since the Wrexham Supporters Trust trusted us to vote in November, we have come to know the people of Wrexham to understand how we can move the club forward through our four guiding principles:

* To create a successful culture

“Working with Gemma Owen and Steve Dale on the community team on a new women’s football initiative has already started. We are also committed to investing in current and future members of the first team squad in order to achieve an advancement challenge.

“In addition, we are in the process of building an outstanding team outside of the field by combining the know-how of the dedicated club staff and volunteers with new employees and experienced advisors. Our search for CEOs is ongoing and we expect someone to be in place before the season ends.

“All of these people will help us create the commercial opportunities that the third oldest club in the world deserves and we will put that revenue back into Wrexham AFC and the community.

“2020 has been a difficult year and there will likely be more public health challenges in the months to come, but we hope to be able to cheer the team on from the stands as soon as it is certain in 2021.”